Weaving through throngs of oncoming traffic and a cacophony of horns – my mouth tingling from the perfectly balanced spicy noodle soup I just finished slurping – I dare to unwrap my grasp around Nick’s torso only long enough to wave back to the beaming children greeting us from their homes on the river’s edge.  Our motorbike jolts forward as we finally break free from the bustling center of Hpa-an, where the chaos melts away into lush, idyllic countryside punctured with dramatic limestone cliffs that stretch to the sky in all directions.  I have dreamed of visiting Myanmar ever since its doors opened to tourism in 2012, and the capital of the Kayin state proves to be the ideal introduction to a country that has long captured my imagination.

Myanmar – or Burma, depending on who you ask – is a country that begs to be explored.  After decades of isolation from the outside world, much of the country is now accessible to anybody with a tourist visa and a sense of adventure.  With several years of tourism under their belt, it may no longer be the virgin land void of foreigners, ATMs and WiFi connections that it once was (although these luxuries are never a guarantee). It is, however, a fascinating destination with a complicated history, a myriad of over one hundred ethnic minorities and cultures, and a varied cuisine that weaves flavors and techniques from neighboring countries into a culinary identity all its own.  In a land whose majestic temple-strewn landscape is nothing short of spectacular, it is the locals’ infectiously warm spirit that leaves the greatest impression.  Being invited for a beer or passed a plate of spicy ginger salad by your neighbor at a street stall – simply because it is delicious and you really must try it – is normal.  They are, of course, correct – and will nod with approval as you order one of your own.

As an explorer of Myanmar, the more you put into understanding and experiencing what makes it unique – and delicious – the deeper your connection will be.  For those looking to delve into its culinary landscape, sampling an array of richly spiced Burmese curries is an admirable way to start.  Accompanied by the pack of fellow nomads that I met at the bus station, I arrive at the Burmese curry house San Ma Tau ravenous – peeking inside each simmering pot and lingering in the medley of warm and sharply pungent aromas, before concluding that we would like to try them all.  As we hydrate with ice-cold Myanmar lager, the small bowls of curries bathing in their own oily juices begin to hit the table in waves until nothing can be seen but pickled quail eggs, tender braised duck and roasted chicken that glows a neon shade of turmeric.  The never ending – and often unidentified – condiments that accompany most meals range from fermented tea leaves (a national favorite) to umami rich bean pastes to cilantro spiked ground chilis, turning each feast into a ‘choose your own flavor’ adventure.  The crunchy local eggplant and fresh herbs at the table’s center act as a palate cleanser amidst the waves of spice.

It goes without saying that a true culinary exploration of Myanmar requires hitting the streets.  Those willing to forego the formalities of restaurant service are rewarded by markets teeming with vendors that sling local delicacies like spicy shan noodles, deep fried samosas and sticky sweet pastries all day long. In the dusty street markets of Hpa-an, we indulged in the light-as-air chickpea crepes drizzled in sweet chili sauce for breakfast, while noodle-stuffed egg rolls and sweet corn fritters deep-fried in a roadside wok and dunked in a tangy ginger-cilantro sauce killed our afternoon munchies.  The wok master exuded a disposition so jolly it was easy to pass an hour crouched at her table snacking, laughing and playing with the groups of giggling children who came to join in on the fun. 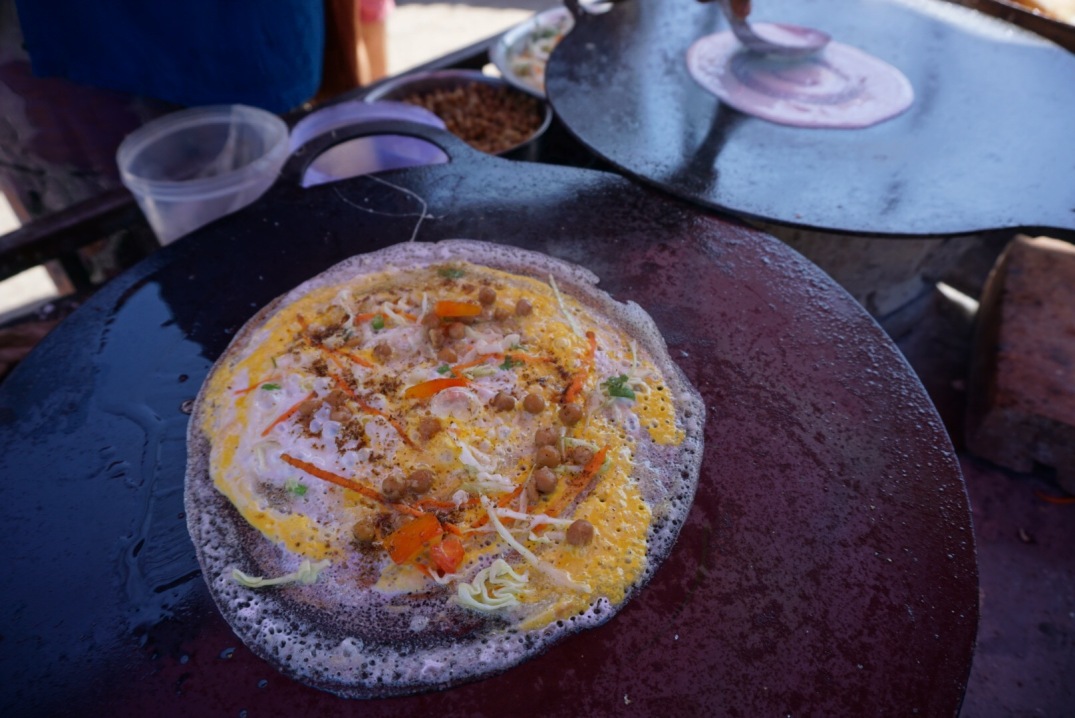 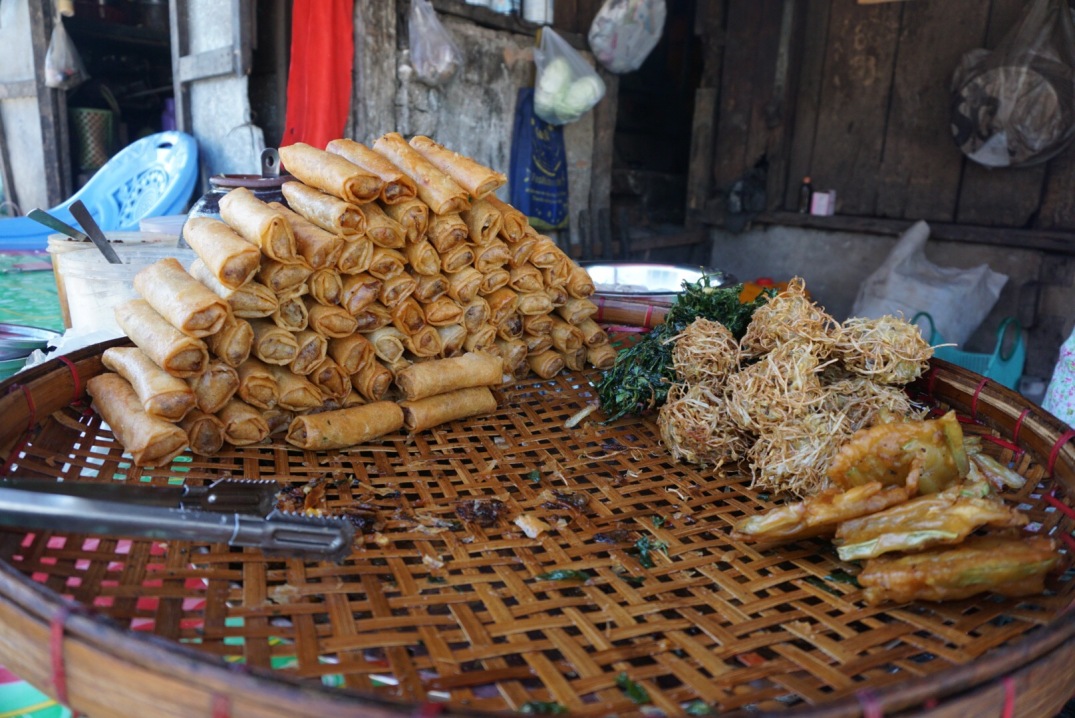 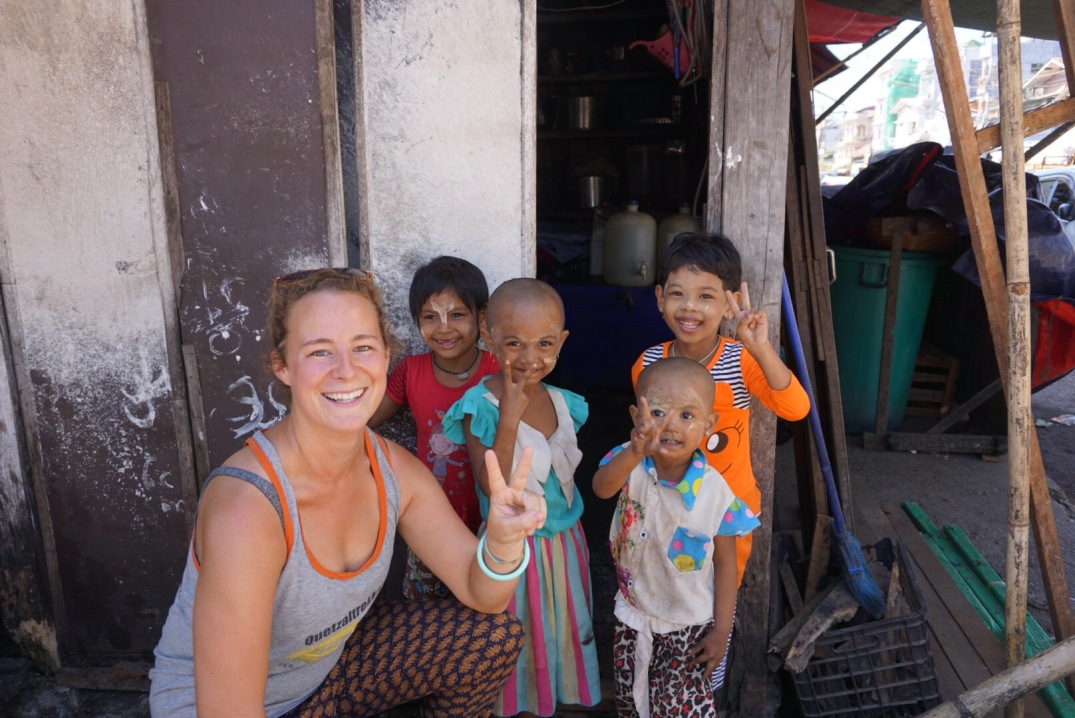 Once properly fueled, we took to the countryside and explored the ancient Buddhist cave temples for which the region is known.  Dating back to the seventh century, exploring the spectacular time capsules decorated with giant Buddhas, chattering bats and dripping stalactites, induces a Planet Earth meets Alice in Wonderland sensation, while the monks and praying locals remind you of the caves’ inherent holiness.  Cruising to the aptly name “Bat Cave” at the town’s edge for sunset grants the opportunity to see hundreds of thousands of bats flock from a small hole in the cliff’s side to begin their nocturnal feasting. 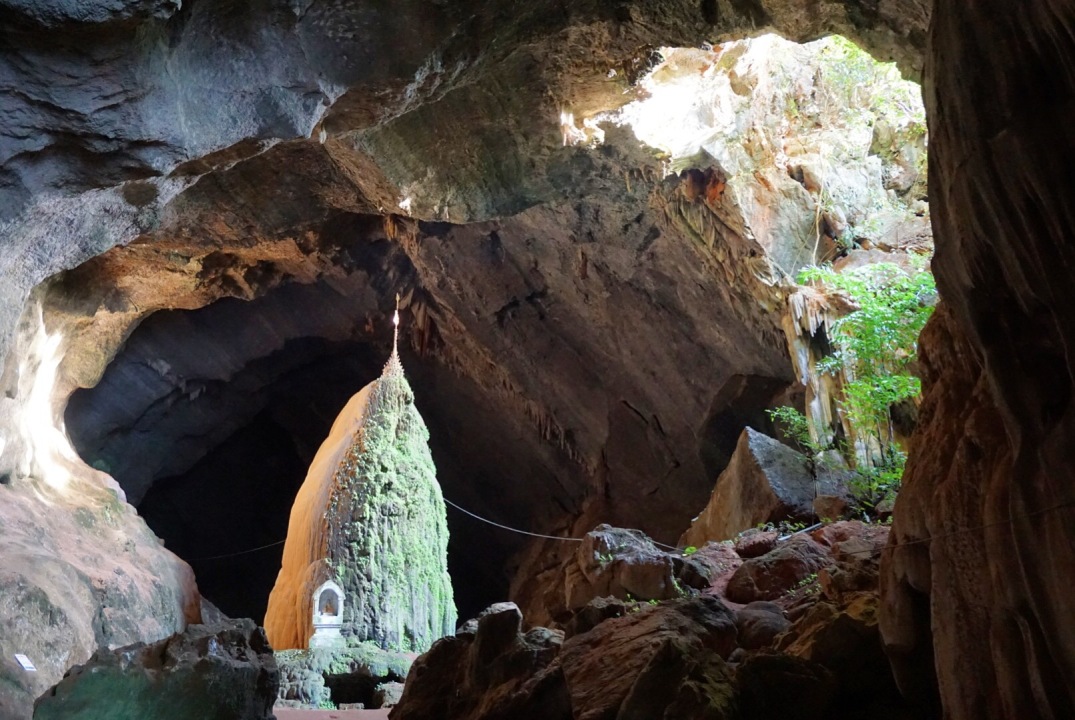 Having heard rumor of a (half) mile-high monastery, we made the grueling two hour vertical pilgrimage up the side of Mount Zwegabin to feast and sleep atop the highest limestone cliff in the region.  The less than luxurious accommodations (read: mat on floor) was more than made up for by the epic panoramic sunset that made us question whether this was all a dream after all.  Our jellied legs that propelled us to the top, however, acted as an earthly reminder that we had earned the right to sleep amongst the monks and clouds.  The modest yet delightful vegetarian feast served soon after sundown lulled us to sleep (along with the aid of Myanmar’s prize ‘High Class’ whiskey) – while the 4 am prayer call woke us back up in time to watch the ascending sun paint the sky with fiery watercolors. 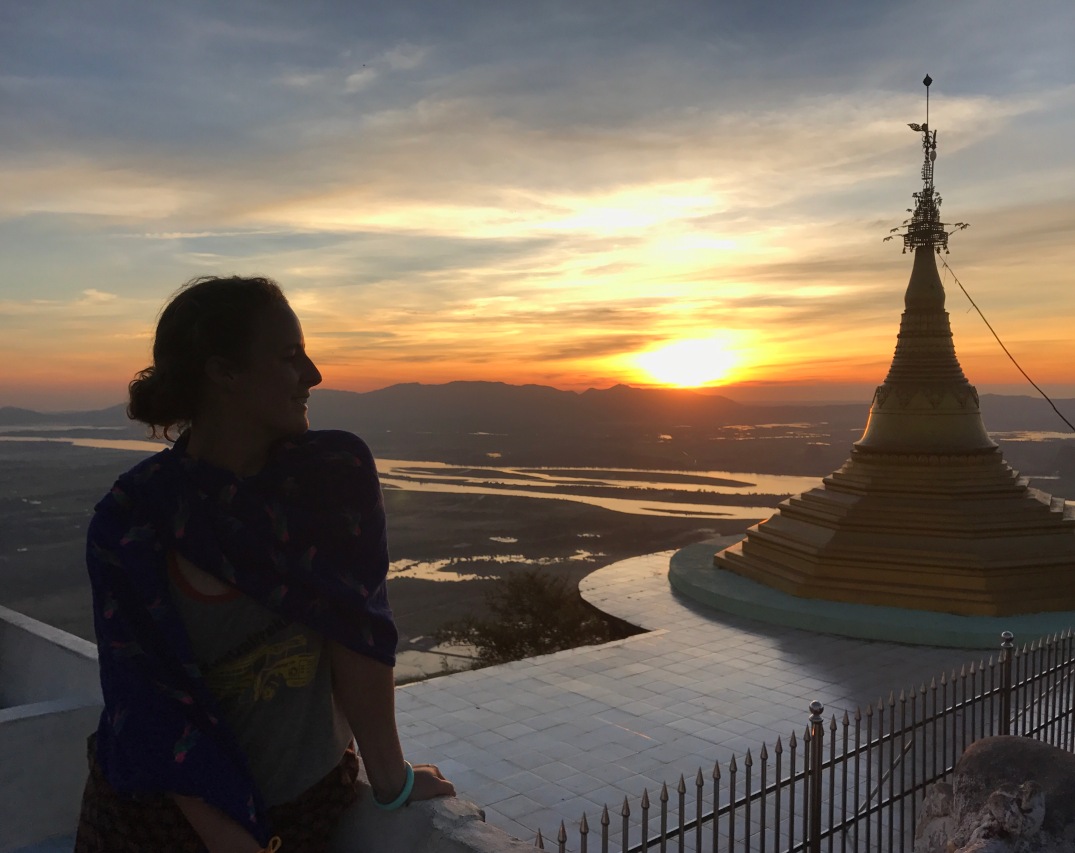 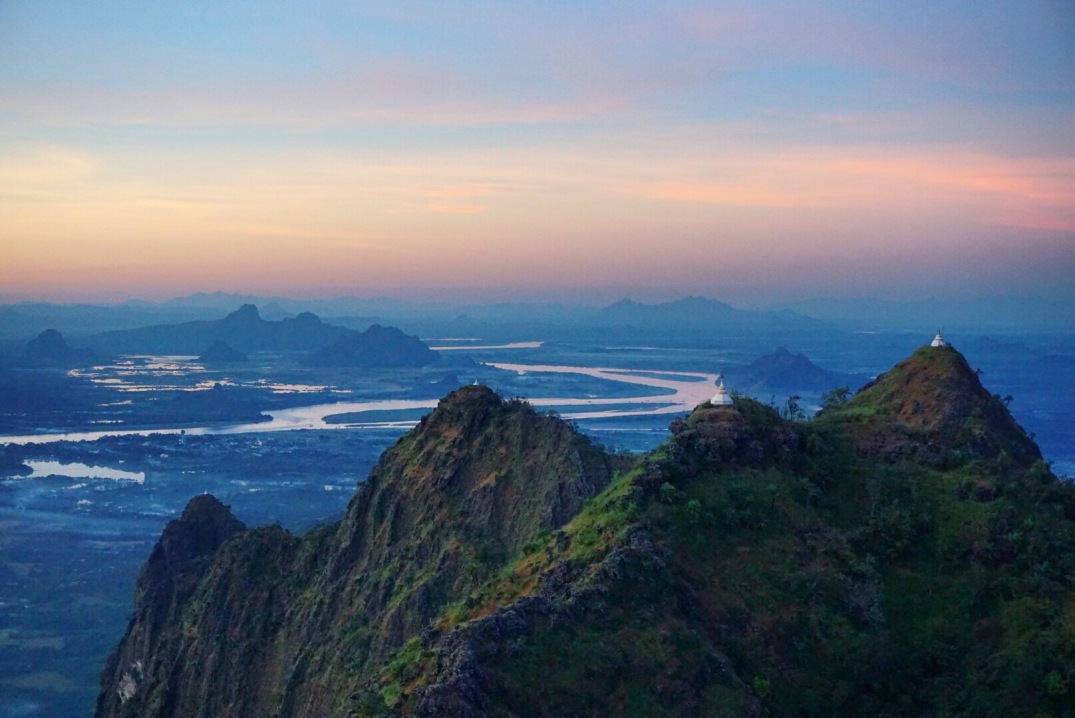 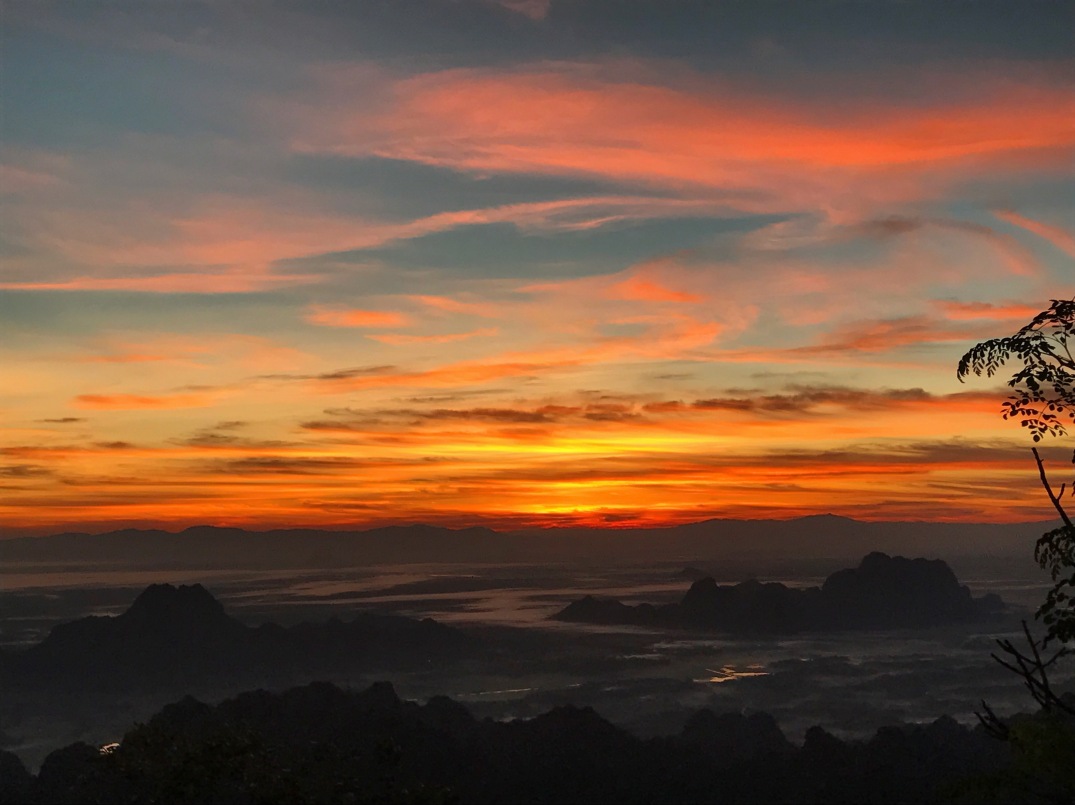 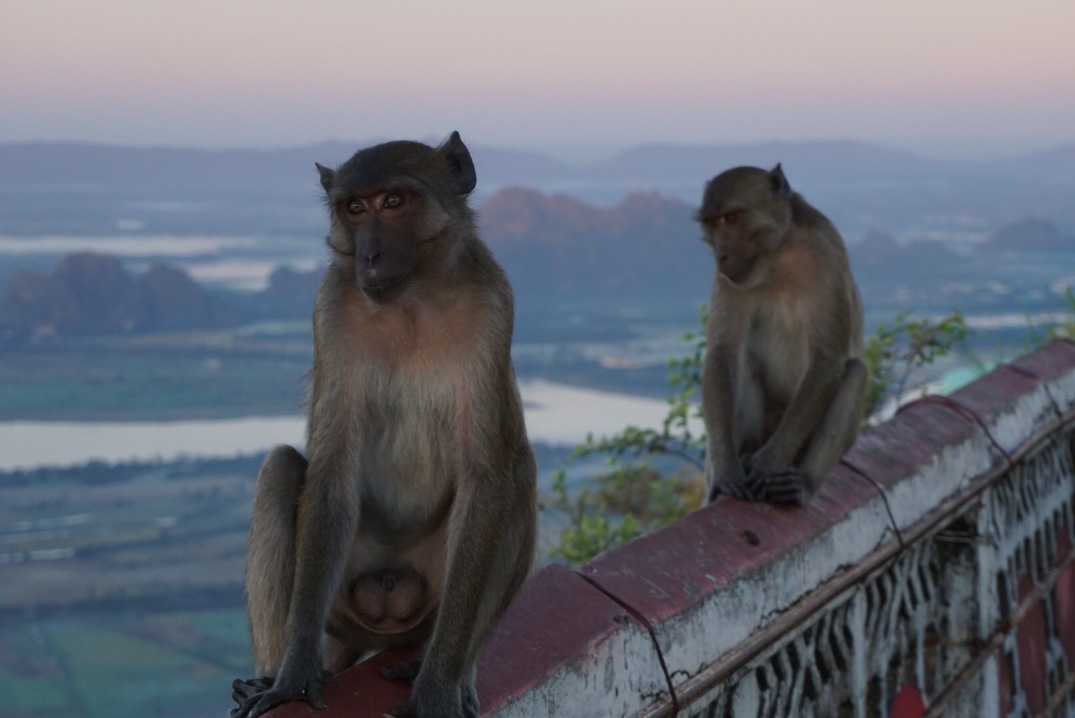 My renewed sense of peace was cut short by the grabby monastery monkeys, who snatched and annihilated my bag of peanuts as I pondered my place in the universe.  An anger arose within me but was quickly washed away by a Buddha quote that came to mind:

In the end, only three things matter:
how much you loved,
how gently you lived,
and how gracefully you let go of things not meant for you.

Perhaps these peanuts just weren’t meant to be; and besides, if Myanmar has taught me anything, it’s that unexpected adventures – and snacks – are just a mere cliff, cave or mountain’s climb away.